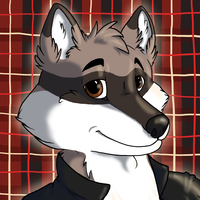 Pascal Farful (born December 2, 1997), is a British musician, writer and fursuiter. His character is a raccoon.[1]

In September of 2018, Pascal collected a premade fursuit head base, of which was debuted at the 298th LondonFurs meet on the 22nd of September of the same year, and has been undergoing modifications and upgrades on a regular basis since then.[2]

As part of his music, he has a series of characters that are created to form a fictional band of which is music is performed by, being himself, Nick Grayson, Maxi "Tommy" Trapton, Jake Shchavelsky and Walter Wallace. Some of his musical works also appear as solo projects by certain band members, though all musical works are created by Pascal Farful himself. Of note, one of his pieces was included in the FreyFox and Ras-B Raccoon charity compilation album Tsunami in mid 2018.[4]

Starting in November of 2015, Pascal hosted the "Furry Musicians Fortnightly Newsletter" on the FurryMusicians FurAffinity page, of which as of December 2018, he continues to do.[5]