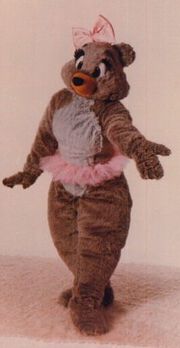 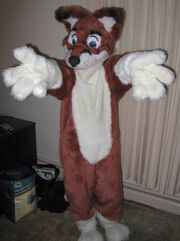 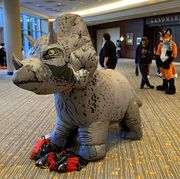 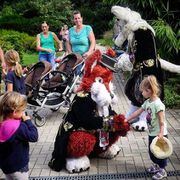 Fursuits, originally known as zoots,[1][2] are animal based costumes associated with the furry fandom. The term can also refer to animal mascot costumes in general,[citation needed] as opposed to human or anthropomorphized object mascots.[clarify]

Although taken as de facto furry lore that the term was coined in 1993 by one of the first fursuit makers and fursuiters in the fandom, Robert "Bob" King,[3] according to professional costume builder and fellow fursuit maker Lance Ikegawa, the term fursuit was already in use in the mainstream, professional special effects world:

Fursuiting as a concept can be traced to as early as 1947, with Edwin Corle's Three Ways to Mecca being the story of an author who decides to start wearing a custom German Shepherd dog suit both publicly and privately out of an inner desire that he himself can't quite put his finger on (though he supposes it was an idea he got after viewing a cartoon of a moose driving a car and his best friend supposes it's due to it psychologically being a perfect balance of introversion and extroversion).[5]

Fursuiting as a permanent feature and practice within the fandom likely dates to the pre-convention era (1984-1989),[citation needed] when the first furry parties were being organized at both sci-fi conventions and home parties. By Confurence 0 in 1989 (the first hotel-based furry convention), a programming track called "Furry Costuming" was held at the hotel at which it took place.[citation needed] Artists and fursuiters Bob Hill and Shawn Keller are regarded as the first and second true fursuiters in the furry fandom, with Hill being an accomplished professional performer, and Keller for his complex built suits.[6]

Many have commented on the change which occurred in the growing fandom when graphic artists, many of whom were native to the funny animal fandom era,[clarify] shared more attention with costumers,[clarify] resulting in the artists' booths being overshadowed by the presence of costumes at conventions and furry parties[7]

This trend continues today, with the number of fursuiters growing exponentially every year at several furry conventions, even breaking established Guinness World Records.[8] Some conventions have included since the early 2000s the position of Fursuiter Guest of Honor.[9]

There are also uncommon suit types. For example the quad suit. It uses the arms of its wearer as the animals forelegs, and the hind legs are often stilts. There are also plush/plushie suits, which are suits that look like giant stuffed animals, with lots of padding and little to no dexterity in the hands.[10]

Some fursuiters wear their suits for non-paid charity work, such as events for social causes (animal rights) or visits to children hospitals or wards for entertainment.[11]

Some people (usually otherkin, therianthropes or furry lifestylers) also fursuit for reasons of expressing what they feel is their inner animal self.[citation needed] Most of them try to make their suits as realistic and lifelike as possible.

There is a perception stereotype in and out the furry fandom that fursuit sex is practiced by all fursuiters, thus consider the fursuit a sexual item.[12][13][14] Some suits may contain elaborately designed/recreated sexual features (sexual organs),[citation needed] while some wearers have simple cut accesses on the suit.[citation needed]

Fursuiters can speak while in costume, typically to their handler(s), other fursuiters, and/or close friends. More elaborate fursuits are built with some form of talk-jaw, either physically (the fursuit's lower jaw being attached to the fursuiter's chin or pressed physically against by the fursuiter's lower jaw in some other holding fashion) or by the use of mechanical/electronic devices, which enables the fursuiter to "talk".

Fursuiters are often included in media coverage of the fandom, such as the CSI episode Fur and Loathing. They may also mentioned incidentally - for example, one of the female characters on the 2009 non-furry novel The Year of the Flood, a 2009 novel by Margaret Atwood, gets a job as a "Furzooter", being constantly sexually harassed.[15]