PREQUEL, also known as Making A Cat Cry: The Adventure, is an interactive webcomic created by Kazerad and set in The Elder Scrolls universe.

PREQUEL started as a thread on the MS Paint Adventures forums, but has since then moved to its own website. It also gained quite a bit of popularity, which caused some performance issues and downtime for the website.

PREQUEL is an interactive story, where readers can submit suggestions for the protagonist, which she interprets as coming from her subconscious. Readers can submit suggestions for characters other than the main one for the strips where the viewpoint changes. The commands can be submitted in the Forum Adventure thread, in the MS Paint Adventures forum.

The main character of the story is a khajiit (an anthropomorphic cat species from The Elder Scrolls universe) who decides to start a new life. She arrives at Cyrodiil on a ship coming from Hammerfell, and chooses a new name, Katia Managan. At this point she's faced with the fact that she has no money, no skills, no friends and an extremely low tolerance for alcohol.

Her inital attempts to get a job end badly, but finally she meets Quill-Weave, a friendly argonian writer who gives her a chance to prove herself, even though Katia just wrecked her house. Despite further setbacks, Katia succeeds at acquiring some new skills and posessions, and things seem to be finally improving.

The main character. She has recently decided to start a new life. Unfortunately her lack of skills and money, and an extremely bad luck work against her. Despite that, she keeps trying, and manages to maintain a positive attitude despite the many problems she has. Katia has a big problem with alcohol. If she has even a drop of it, she blacks out and both times she had it, she came back to her senses in a bed, after having slept with an Orc the first time, and with a necromancer the second.

Katia has regular nightmares involving a King when she's sober, which seems to be part of what caused both her alcoholism and fear of royalty.

She wasn't raised around other khajiit and as a result has trouble socializing with other members of her species. Even non-khajiit remark that she seems unusual. 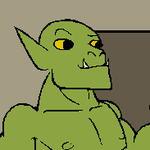 A bandit who Katia makes a bad decision to sleep with while drunk. 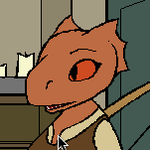 She's a writer who takes pity on Katia and gives her a way to earn some money, by having her carry a letter to another city. She gives Katia a second chance when her first attempt fails.

A Soldier Of The Imperial Legion, or "Asotil" for short is an unnamed soldier who takes fighting crime very seriously. He has an extreme respect for the law, going as far as voluntarily imprisoning himself at one point. On the other hand, while he does understand social norms he doesn't feel a need to abide by them, does things like interrupting a dinner party to dump a bunch of dead bandits in front of the Countess.