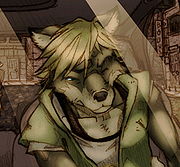 Originally from New Orleans, Owen lived in a small apartment in a dilapidated building in Maranatha City, with neighbors Double Bill and Mrs Ackerby and her dog Pickles, under the rule of landlord Butterfly. His second-story apartment faces into a courtyard with clear line of sight from Nicky Marlowe's apartment on the other side.

After his departure from Maranatha City, he was most recently seen in London, not far from Piccadilly Square, though it's unknown whether he resides in that city.

Owen is a prostitute, servicing predominantly male clients, preferring the term hustler over escort because of his preference for the quick and anonymous servicing of a large number of clients rather than 'spending the night' with one particular customer.

Owen continued to ply this trade even after Maranatha City, though by the time he appears in Heathen City he is very close to 'retiring' fro the profession to find another direction for his life.

Owen's oldest friend and lover, in all but name, is Q. I. Malloy, a dobermann burglar and drug dealer, with whom he first traveled to Maranatha City. While sexually active and emotionally intimate with each other, the pair never had a relationship in the romantic sense, and only briefly shared an apartment in their early days in Maranatha before going their separate ways.

Owen has most recently been seen in various Soho nightclubs in the company of a tiger named Ruy. The precise nature of this relationship is unclear, though Owen's decision to quit his life of prostitution came very soon after his first encounter with Ruy.

Owen is technically Jewish, and is known to occasionally uphold certain aspects of the faith, electing to eat kosher on significant days such as Hanukkah, Yom Kippur and Rosh Hashannah. The arbitrary nature of his observances and, of course, his profession, indicate that this is motivated less by actual belief in the Jewish scriptures, and more by his upbringing, and the comfort of familiar rituals.

Owen Zelzny appears as one of the core cast of the serial graphic novel Heathen City, written by Alex Vance, illustrated by Ayato and digitally colored by Distasty, Krahnos, Charha, and Fel. He had previously appeared in Alex Vance's unfinished story series Maranatha.