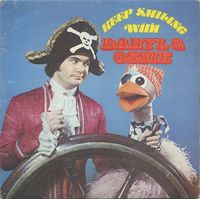 Album cover from the 1976 comedy release Keep Smiling with Daryl and Ossie.

Ossie Ostrich (full name Oswald Q Ostrich) is an Australian television character, firstly on The Tarax Show, and then on the long-running program Hey Hey It's Saturday which started as a Saturday morning cartoon show for children in 1971.[1] In 1984, he also hosted an after-school children's show called The Ossie Ostrich Video Show, with co-host Jacki MacDonald. In October 2009, Ossie appeared on the second Hey Hey It's Saturday reunion special and made regular appearances during the show's 2010 revival series.

Producer Ernie Carroll, an experienced comedy writer who had worked for Graham Kennedy's In Melbourne Tonight, resurrected a puppet used for an earlier GTV-9 children's program "packed away in a dusty suitcase in the GTV props bay."[2]

Typically, Ossie would provide the comic foil to Somers' straight man. Somers sometimes retaliated by calling Ossie names like 'Fiberglass Head', but he also had more affectionate names, like his 'pink, feathered beakie'. The comic skill of Somers and Carroll was instrumental in leading to the wider appeal of the show and its move to a prime time spot on Saturday evening.

According to Hey Hey It's Saturday The Book:

Ossie Ostrich stepped out of the case and, as if under the control of a superior being, walked to the host set and looked directly into the left eye of Daryl Somers. "Well, I never!" said Daryl. "Oh you must have," said Ossie. And a link was formed that could only be broken by money. People who actually witnessed that moment say that a spark of electricity seemed to pass between the two. When asked, Daryl said he was not sure but Ossie distinctly remembers passing something. [3]

Ossie wasn't a part of Hey Hey It's Saturday for the entirety of its 28-year run - he replaced footballer Peter McKenna as co-host after the show's first eight weeks, and his retirement in 1994 was arguably a key factor in the demise of the show - but he was one of the most recognisable puppets in Australia for more than two decades.

Over time, Ossie's head had to be replaced due to mishaps. Lipstick marks from over-amorous admirers were very difficult to remove. Other members of Ossie's family were represented using the same puppet with different accessories. The Ossie Ostrich puppet is now on display at the National Film and Sound Archive in Canberra.

On the Tarax Show, Ossie's theme song was "Here comes Ossie Ostrich". This was also occasionally heard on Hey Hey.

Merchandise included a plush toy version of Ossie and a marionette puppet, as well as comic books. TV Week carried an Ossie Ostrich comic strip for a period, and these were collected in book form.