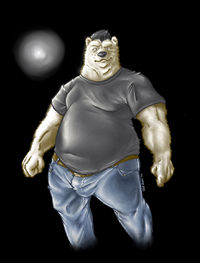 Oso Alex (Alex Bear in Spanish) is a furry artist and graphic designer who lives in Uruguay.[1]

Oso's fursona is an anthropomorphic polar bear with black hair on his head. He often wears a black T-shirt and blue jeans. Oso's fursona evolved from a dragon to a grizzly bear, and, ultimately, changed to become a polar bear.

In 2013, Oso directed and produced his own cutout animated shortfilm as part of an educational program to get started in cinematography. It narrates the story of a lone anthropomorphic polar bear warrior whose life has been stolen and destroyed by an apparent big war between wolves and bears. The film has been shown as part of two international open cinema festivals in Valladolid, Spain (2014) and Almería, Spain (2015).