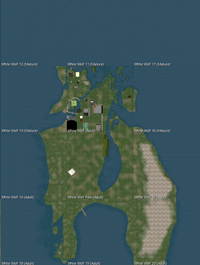 The OsGrid Furry Continent is a group of regions on the opensource platform OsGrid OpenSim aimed at providing a place for Furs, Nekos, and Otherkin.

In late 2016, longtime resident Rycon/Logan Bamaisin saw the Fur Valleys slowly slipping from view in the scope of furs & nekos in Second Life and came up with a plan to restore all valley regions that had gone under and make the valleys relevant again. These ideas were shared with Mako Minogue and Wolphin Fluffball, two of the founders of the valleys and they were on board with Rycon's ideas. Before Rycon could relay his ideas to Foxkin Impfondo, he had passed away and his estate dissolved. Armed with not wanting the valleys or the idea of virtual furs having a place to go, Logan's first attempt at paying it forward was recreating the valleys in Minecraft, a project that lasted a month and in the end, showed no merit. After taking a hiatus from everything, Logan brought some regions online in OsGrid OpenSim where they've remained.

To better serve the virtual side of the fandom, Logan teamed up with fellow fur Jeeper Shim to create OsGrid's first ever Furry Continent. The continent currently consists of the valley regions Logan brought online(31 regions in total) and Jeeper's White Wolf regions(13 regions in total) bringing the current continent total to 44 regions. The purpose will be to provide virtual space for those that want it, mirroring what the valleys originally stood for.

Jeeper Shim's White Wolf Regions consist of 13 regions put into a 3x4 block making up the bulk of the estate with a single region (the maze) out in the middle of nowhere. The estate has only ever been in OsGrid and is established with remaining in the same spot for 10+ years.

The valleys make up the lower end of the continent and currently stands at 10 regions. The estate is hosted on a single 6-core Intel E5-series server running Ubuntu 18.04