Orkin is a pest-control company. Founded in 1901 by then-fourteen-year-old Otto Orkin, the company operates across the United States, Canada, Central America, the Middle East, the Caribbean and Asia.[1]

Between 2008 and 2011, Orkin's advertisements featured humans having their lives interupted by giant anthro pests. The intrusions would be foiled by the timely arrival of an Orkin exterminator, and the commercials would end with the pests making a quick getaway in some form of vehicle. 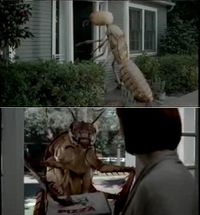 A husband and wife are going through their morning ablutions when there is a knock at the front door. The husband responds and finds a giant termite on the doorstep, who asks, "I wonder if I could use your phone? My car broke down a few blocks over and..."

He is suddenly distracted by the man's hardwood floor, asking "Is that oak? I wanted to call my brother-in-law...".

The termite leaves in a black car.

A woman is peeling vegetables for dinner when the doorbell rings. She opens the door to find a giant cockroach holding a number of pizza boxes. "Hi", the roach says, "here are your pizzas."

The woman warily replies that she doesn't think they ordered any pizzas, and the cockroach tries to con his way in by asking, "Why don't I... uh, place this on your table?"

The cockroach leaves in a grey car. 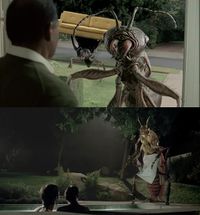 A man is in his kitchen pouring a cup of coffee when the doorbell rings. Answering the door, he is a greeted by a giant ant, who tells him "Hello, we're here to deliver your new... couch". Behind him, a second ant stands on the lawn, effortlessly holding a couch above its head.

The man is baffled, having not ordered any new furniture. "It has a matching ottoman", continues the first ant, before it dips a foreleg into the man's coffee and comments, "Mmmm... sugar...".

The ants leave on a grey pickup truck; one driving and the other standing in the cargo bed.

A couple are enjoying an intimate moment in an outdoors hot tub at night, when they are interupted by a voice saying "Hi". They look up to see a six-foot cockroach standing by the edge of the tub, carrying a bottle and wearing a towel around his waist.

"Beautiful night", the cockroach continues, "Mind if I... join you?". He allows his towel to fall and dips a foot into the water as he enquires, "Are we... dipping skinny?".

The cockroach leaves on a motorcycle, pulling a wheelie as he does so. 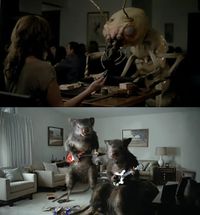 A young woman is at a restaurant, awaiting a blind date; she checks a photo of a handsome man on her mobile phone and looks around hopefully. A voice asks, "Jennifer?", and she is startled to see a giant termite seated across from her. He introduces himself; "Todd. From BlindDateLove.com."

The stunned woman manages to whisper, "You don't look anything like your picture". "Yeah yeah", the termite replies, turning over her hand so she cannot look at her phone, "that was taken years ago". As the termite begins to stroke the woman's hand, he asks, "What do you say we go back to your place?".

The termite is seen departing in a white car with purple undercarriage lighting.

A family of four arrive home after a vacation. As they enter their house, they become aware of the unexpected sound of loud rock music coming down the hall. Warily following the sound to their living room, the family finds two filthy rats playing Guitar Hero amongst the detritus of several torn-open food packages.

When the rats finally notice the family, they abruptly stop playing, and one of them points at them, saying accusingly, "You. Were not supposed to be back until Sunday". Sneering, he continues, "We could use the boy". "Yeah", the second rat agrees, as the first concludes, "On drums". The two grin evilly.

The rats are shown leaving in a rat rod.

This particular advertising campaign was developed by the The Richards Group, an American advertising agency headquartered in Dallas, Texas. The creatures in the commercials were built by Legacy Effects, a special effects company in San Fernando, California.

"BlindDateLove.com" - the dating service website mentioned in "Blind Date" - was registered by Orkin as a joke dating website, on which people could upload portraits and overlay them with the heads of pest species.