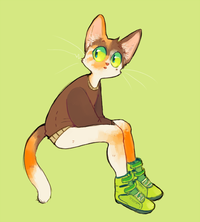 A full picture of Onno.

Onno has been a part of the furry fandom since around the start of 2012, being a "closet fur" for half of his first year.

Onno's fursona is a cat who stands at approximately four feet and eleven inches tall, and weighs seventy-nine pounds. Onno's first fursona was a small blue dragon named Nax, whose likeness did not last more than the first couple months.

Onno grew up in a city apartment in (fictitious) Chicago with his brother, Felix Valent. He had been home-schooled by Felix for about ten years, leaving Onno confined to the apartment for a majority of his life - speculated to be the cause of his skittish tendencies and overall shy nature.

Onno had a few friends that lived nearby in other rooms of the apartment complex, but he would often be too timid to interact with them. By the time Onno turned fourteen, Felix had left him half of his inheritance money (from Uncle Myrton, aged seventy-nine, who died of natural causes three months prior) and fake identification papers to continue paying to live in the apartment.

Felix claimed to have left for "work-related reasons," but no word of his whereabouts have turned up since his departure. It is not clear what steps Onno had taken, exactly, to continue living at the apartment without a problem, but his next two years up to now have been spent there.

Onno's first partner was an onyx dragon named Blake. They kept in touch mostly through social media, rarely making plans to meet up, as Blake would have had to travel to him each time, instead of vice versa. Onno's relationship lasted around five months, and came to an end when Blake broke up with him over an unconfirmed suspicion that Onno had cheated on him.

Onno has freelance jobs as both a digital artist and author, but does not make more than a hundred dollars a month of these, and continues to live off his previously received inheritance fund.