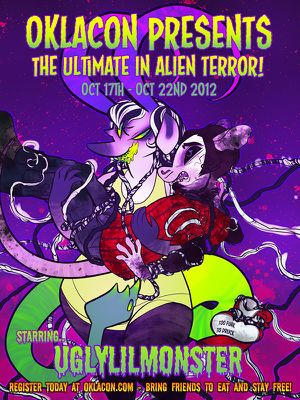 Oklacon 2012 was the tenth installment of Oklacon, a furry convention scheduled for October 17 through October 22 at Roman Nose State Park in Watonga, Oklahoma, USA. The group that organizes Oklacon collaborated with the selected Guests of Honor to choose the theme for 2012. The theme 'It Came from Planet X' is both a use of "X" to denote the Roman numeral for the 10th Oklacon, and the thematic concepts of B-movie science fiction monsters was chosen to work well with the art style of the first chosen Guest of Honor, who is known for her creepy, sometimes grotesque, furry monster creations.