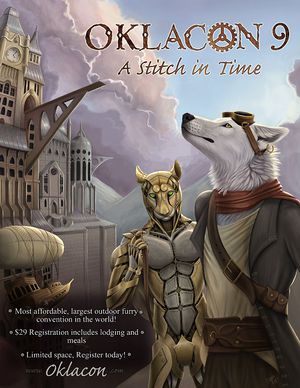 Oklacon 2011 was the ninth installment of Oklacon, a furry convention that occurred from October 19 through October 24 at Roman Nose State Park in Watonga, Oklahoma, USA. The group that organizes Oklacon collaborated with the selected Guests of Honor to choose the theme for 2011. The theme 'A Stitch in Time Saves 9' was a play on Oklacon "9" as well as a way to suggest a metaphor for crossing timelines to create anachronisms, including Steam Punk, which is the theming focus of this convention year.

Before the Oklacon 2011 staff even arrived on the group camp site to begin unloading before the convention, Harvest the Husky broke his arm after attempting to skateboard down a steep hill in the state park venue. He was transported by a friend, Kodi Wolfe, for treatment at a local hospital, and then for surgery in Oklahoma City. For the remainder of the convention, numerous attendees and staff running events affectionately referred to him as "Stumbles the Hill Husky", in playful reference to Tumbles the Stairdragon.

Many attendees reported the convention was very successful, citing numerous events, high attendance, and a relaxed security presence over previous years.[2] The results for charity vastly surpassed the lofty $6,000 goal set during Opening Ceremonies, which itself would have surpassed the then-record of $5,365. The final total collected for Safari's Interactive Animal Sanctuary was $8,193.88, which included $900 raised through charity poker, $1,110 raised through a special Super Sponsor Soiree event, and over $260 raised during Closing Ceremonies, when BlueOtter announced to a shocked audience the convention had nearly reached the $8,000 mark.

Despite mention on a news-related blog[3], mention on a local radio station KQOB, and numerous media inquiries from independent newspapers and at least one documentary crew from Tulsa, no actual reporters or media were spotted at the park during Oklacon's weekend.