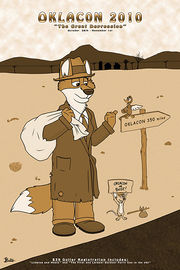 Oklacon 2010 was the eighth installment of Oklacon, a furry convention that occurred from October 27 through November 1 at Roman Nose State Park in Watonga, Oklahoma, USA. During a preregistration event in the summer of 2009, the attending group mutually decided on 'The Great Depression' as the theme for 2010, both as a play on the word 'eight' and as a reflection of the tough economic times affecting most attendees at that time. This theme represents a departure from the traditionally horror or Halloween related themes of previous years, but also represents one of the more readily cosplayed and decorated themes.

Oklacon is a charity-focused convention, and hosted multiple events that raised funds for Safari's Interactive Animal Sanctuary. Events that contributed to the total were:

Finally, when the figure of $4,831 was announced at Closing Ceremonies, Horses' Ghost took the mic and asked if the convention might be able to raise an even $5,000 for the convention's charity. Over 20 attendees rushed the front of the ceremonies and dropped an additional $534 on it, bringing the total donated for charity to $5,365. A CAN$5 bill was also dropped onto the donation pile, which is not included in the final figures.