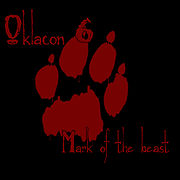 Oklacon 2008 was the sixth installment of Oklacon, a furry convention held from October 23 to 27 at Roman Nose State Park in Watonga, Oklahoma, USA.

In recognition of the sixth year of Oklacon, the membership of OAAA chose the theme 'Mark of the Beast' for this year, referencing the Biblical link between the number six and 'evil' of Halloween, which is always near the date of the convention.

The guest of honor was Jeff Goode. Originally, Oz Kangaroo was to have been the 2nd guest of honor along with Jeff. However, at the last minute, Oz announced he would not be able to attend due to conflicts with his job and financial issues, and so Jeff was the singular guest of honor for 2008.

The convention's t-shirt art was by Oddy Redwing.[1]