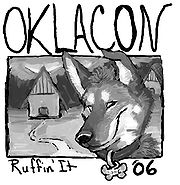 Oklacon 2006, the fourth installment of Oklacon, was a furry convention that was held from October 27 to 29 at Roman Nose State Park in Watonga, Oklahoma, USA.

The convention's t-shirt art was by EbonyTigress.[1][2]

$2,300 was raised for Safari's Interactive Animal Sanctuary, the official charity. Formal attendance figures have not yet been released, but convention president BlueOtter mentioned that the average charity donation per person was $18, which computes to about 128 attendees, which would be a convention record.[3]