From WikiFur, the furry encyclopedia.
Jump to: navigation, search
Community > Events > Conventions > Oklacon
Oklacon (previously the Festival of the Feral) was an annual furry convention held in Oklahoma, USA. It was a full-weekend event, running from Thursday through the following Monday, every year on the weekend of or immediately preceding Halloween. This predominantly outdoor convention emphasized hands-on community and small-group craft, gaming, and wilderness activities. It was the first outdoor-format furry convention in the US, and, until its demise, was the largest outdoor furry convention in the world.[1][2] Even with an annual turnout of approximately 350 attendees, several individuals prominent in the fandom visited the convention, including 2, Blotch, Jeff Goode, and Sub-level 03 (which made its debut in the furry scene at the first event in 2003[3]).

Oklacon was organized by Fuzzy Productions, the legal entity that produced the convention for the benefit of the convention's designated charity, Safari's Interactive Animal Sanctuary in Broken Arrow, Oklahoma, USA, from 2004 through 2013.[5] From 2004 through 2013, the attendees of Oklacon raised over $50,000 for the charity.[2] In 2014, the charity beneficiary for Oklacon changed to WildCare Foundation of Oklahoma.[6]

By design, Oklacon was geared to be a local convention catering to furs in the Southwestern US; however, registrants from as far as Germany attended. Oklacon was 70 miles from the nearest airport, and most attendees drove from Oklahoma, Texas, Kansas, Arkansas, Louisiana, New Mexico, and other surrounding states. Roughly half of attendees were from Oklahoma, and approximately 25% were from Texas.[7][8] It was advertised as the most affordable furry con in the world.[9] Oklacon's registration price was less than half the average basic registration prices of other major conventions.[10] Only one other convention, Furry Connection North, posted a lower pre-registration price[11], although Oklacon registration fees included lodging accommodations and some meals,[12] which made the bulk of attendance costs the cost of gas.

Often 50% - and up to 80% - of each year's attendees had not attended a prior Oklacon event.[13] A majority of first-time Oklacon attendees (by a show of hands at each year's opening ceremonies) self-reported Oklacon as their introduction to furry conventions. The convention marketed the bimodal nature of the attendance base, with a large percentage attending Oklacon as their first furry convention and a large percentage having attended Oklacon for many years, as a positive aspect to prospective dealers and artists who wished to introduce their work to new audiences. 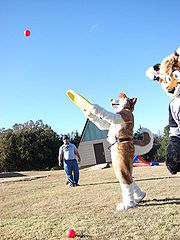 Like many other outdoor-format conventions, Oklacon combined events typical of traditional hotel conventions with unique events that took advantage of the specific venue or general wilderness environment. Traditional events included a Dealer's Den, an Artists' Alley, an Art Show and a Charity Auction, which took place in a multipurpose building in the center of the group camp site, named the 'Turkey Roost' by the State Park staff, as many wild turkeys were often seen around the site prior to the arrival of the larger convention attendance. Outdoor events ranged from Frisbee contests, volleyball, fursuit bocce ball, and monster croquet, to Predator and Prey. A delegation from Feral! visited and imparted one of their staple events, Predator and Prey, into the annual event calendar, which remained a popular and large event, lasting up to three hours of game play each year. The convention had a strong focus on its charity, and many events, including the Charity Auction, Charity Poker, and proceeds from regular art auction sales directly or indirectly raised funds for it.

In September, 2015, is was announced that Oklacon had been "cancelled this year and indefinitely".[25] Earlier that year, it had been announced that Roman Nose State Park had terminated their relationship with Oklacon, and denied the group camp application for Oklacon 2015.

Previously that year, Oklacon staff had noted "a chill indifference from the park managers and rangers in the past few years":[4]

Things came to a head during Oklacon 2014, when "three first-time attendees showed up a night before opening ceremonies, intoxicated themselves, and engaged in public sexual intercourse in the middle of group camp in night."[4]

In the State of Oklahoma, women cannot legally consent to sex if they are intoxicated, even if they consent before or afterwards, so park management reported this incident to the Blaine County District Attorney as required by Oklahoma law.[4] Various Oklacon volunteers who witnessed the event also provided written statements of the incident, to fully disclose what occurred and to document Oklacon's appropriate handling of the issue; upon discovering this incident, Oklacon staff stopped it, immediately reported it to the rangers, and ejected the three individuals from the convention.

Some months later, the park rangers realized they did not document the event properly, and asked Oklacon for additional follow-ups to the statements they provided. The Blaine County District Attorney, in his official capacity, requested through the rangers a full attendance list for Oklacon 2014, so that he could potentially contact each attendee to see if they could corroborate the written affidavits they already had.

Oklacon did not feel this was right or required by law - whilst they had provided written affidaviats and information about the three individuals ejected from the event, they felt it was not appropriate for them to turn over the names, addresses, telephone numbers, dates of birth, car tag numbers, and dealer tax ID numbers of those who had no involvement or knowledge of the incident. Hence Oklacon staff declined the request, and indicated they would fully comply only if legally compelled to do so by an official subpoena.[4]

No subpoena came, but Roman Nose park staff returned their deposit check, provided a two sentence denial letter, and referred them to their state general counsel (their lawyers) for any questions. Although Oklacon staff followed up with their general counsel, an impasse was reached and Oklacon staff found a new home at Sequoyah State Park for Oklacon 2015.[4] This fell through when "an Oklacon attendee directly contacted Sequoyah and linked our event with these serious lapses in judgement by those three individuals that damaged Oklacon’s reputation and ability to host at RNSP to the Sequoyah State Park staff."[25] Sequoyah viewed Oklacon as "too large of a liability to be hosted there", and they received notice from the state-level management of the park system that they would be denied from re-entry to any state park in the future.

With this in mind, Oklacon staff announced the indefinite cancellation of the convention. Some staff subsequently formed a smaller camp-out event, Furry Retreat.