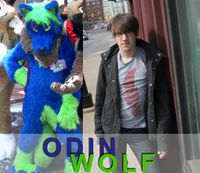 Odin Wolf in fursuit and in real life

He used to upload adult photo murrsuit content of his character to the adult website Xtube, where he released multiple videos between 2009 and 2015, for which became notorious due to their popularity. Within this same time period, he uploaded photos to his (now deleted) NSFW Tumblr page, and was featured in multiple photos on the Rubber Asylums' Twitter page.

Eventually he deleted all this media in order to focus more on his professional YouTube career, releasing a video to his YouTube channel title I Discuss My Murrsuiting Past., detailing his past adult media period.

He also has an alternate version of his fursona named Nido Flow who is a bunny (he also has a fursuit for this fursona as well. Nido Flow is Odin Wolf spelled backwards).

Odin has several fursuits depicting his wolf fursona. One of the heads was made by Stormfire Studios, and the body by Noble Wolf.[2]

Odin is known for making furry related videos where he discusses random topics such as his past for example. Odin Wolf started his YouTube career back in early 2017, as a way to try out something new. He originally directed his following from his Tumblr and Twitter. On February 9, 2017, Odin published his first YouTube video titled, Furry Tries to Make WEIRD Japanese Candy Kits.

Around Late 2017 and early 2018, Odin's YouTube channel started to become more popular as he was gaining thousands of subscribers. He has since collaborated with other well-known furry figures in the furry YouTube scene such as Majira Strawberry, Nos Hyena, Corey Coyote, and Beagle.in.red. As of March 2020, Odin Wolf has 109,000 subscribers on YouTube, 6,000 more than of April 2019.