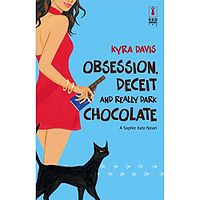 Obsession, Deceit, and Really Dark Chocolate is a mystery novel by Kyra Davis that involves furries. Mystery writer Sophie Katz teams up with her ex-boyfriend P.I. Anatoly Darinsky to investigate the death of the husband of her old teacher. The husband seems to have been killed for having a juicy secret about one of two political hopefuls running for congress- that one of them is secretly a furry!

This book is fairly typical in depicting furries in a negative light and focusing on the sexual aspect. It's clear that the author is not familiar with the furry fandom at all. One of the characters in the book makes reference to the infamous Vanity Fair article, which seems to have been the author's main source of research. All furries are depicted as fursuit-wearing sexual deviants. Plushophilia is also explained. It is remarkable for one bizarre assertion, that those that wear fursuits for sexual purposes cannot also be plushophiles.

Not many books deal with the fandom itself to such a large degree. The furries are integral to the plot, even if largely depicted in a negative light.