Nyan Cat, also known as Pop-Tart Cat, is an 8-bit animation meme featuring a cat with a cherry Pop-Tart body flying in space with a rainbow trailing behind it. 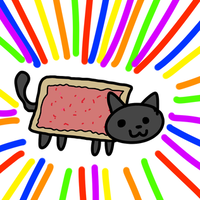 Originally created by pseudofur PRguitarman, it was uploaded in April 5, 2011 on YouTube by user saraj00n paired with the Japanese Vocaloid song Nyanyanyanyanyanyanya and has since reached meme status, uploaded thousands of times to sites such as YouTube, among others.[citation needed]

Countless instances of fanart exist, especially on deviantART. The meme has also been used as avatars on many furry sites.[citation needed] Fur Affinity's banner was briefly an image of a "Nyanified" Fender, which was referred to as a "Nyan Infection".[citation needed] In February 2021, an NFT-backed "remastered" version of the original Nyan Cat gif was auctioned for 300 ETH, a cryptocurrency that at the time of auction was worth almost $2000 per ETH, making the full sale price in USD around $600,000.[1]