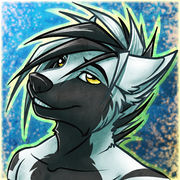 notveryathletic is based in the UK and an active member of the furry fandom.

His main fursona is a wolf hybrid called Tempest who was introduced online in May 2005 and who has several alternate forms which he can transform into by using his 'lifeforce' to do so, these forms are called Tempest Omega, Tempest Beta & Tempest Alpha; a detailed profile is available on his website detailing the story and appearance of each form

He also introduced in July 2011 a Dr Sawyer character which he adopted from Feralise; the character is currently lacking a detailed profile but based on recent submissions on Fur Affinity is said to be a 9'6 Siberian Sabertooth Tiger who works as a doctor and has healing abilities which can help him to grow as well based on a macro theme.

Notveryathletic draws mainly digital works with a focus on colouration work of lineart drawn by other artists; while he does also draw his own artwork this is done less frequently than colourations based on viewing the submissions available in his online galleries. His main artistic themes are both Macro & Muscle themed artworks although other themes have appeared in his gallery mainly as a result of charity commissions which he has worked on.

He also commissions artwork of his own characters as well as for friends of his and has a notable collection of artworks from other artists as a result of this which can be viewed on his Official Site as well as in the Scraps folder on Fur Affinity which he uses to segregate his own works from work done purely by other artists.

Since 2008 he has been accepting Charity Commissions which are advertised as working in the same was as regular commissions with the main difference that the money received is then donated periodically to the WWF Organisation; referring to the numbers given on his Official Site the total raised as of August 2011 is shown to be over $2,000 partly thanks to promotions with the WWF which allowed the money he had raised to be doubled at those points in time and which were also publically documented for ease of reference; these were the WWF's "Big Give 2010" promotion which accounts for $446 being doubled to $892 and the WWF's "Sky Jaguar 2011" promotion which accounts for $360 being doubled to $720).

In addition to this he also sponsors an ad banner which is in support of the WWF Organisation on Fur Affinity which has been active since late 2008, the banners themselves have changed over time mainly due to Fur Affinity's policy of keeping them updated, a few recent examples can be seen here, here and here.

In September 2010 he was also responsible for another promotion for the WWF Organisation as part of their appeal to double tiger numbers during 2010 (which was the year of the tiger) on Fur Affinity where depending on how many favorites this image received he would donate more money up to the sum of $1,000 should the total surpass 3,200 (which was chosen based on the number of wild tigers which were identified to exist in the wilde as of that time). Despite some confusion as to the purpose of the promotion from some individuals it was ultimately very well received mainly due to the fact that the total required was achieved within a week, and the donation was then made and again publically documented for ease of reference.

At Anthrocon 2011 he also arranged a table in the Dealer Den to show support for the WWF Organisation , which he states to have been a relative success based on his summary of the convention.

He is also an active contributor for the DeviantArt group Save-The-Tiger which he joined in early 2011, where he has made several journal updates and other contributions which have also been recently acknowledged formally by the group founder in a recent blog update.