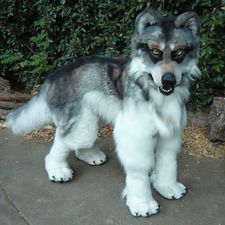 Non-anthro, full non-anthropomorphic, also known as non-morphic or feral, is a furry term used to describe a fictitious character or fursona that do not share almost any human characteristics traits associated with full furry/anthro beings. Less commonly, it is used to describe a regular, non-sapient animal.Non-anthro has the anatomy of the paws (sometimes hooves) of an animal, often short limbs of the same length, and not legs as in humans, and most likely moves on all fours.