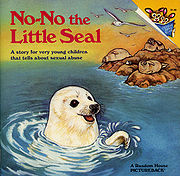 No-No the Little Seal, subtitled "A story for very young children that tells about sexual abuse", is a book which was published by Random House in 1986 (with ISBN 0394880544) along with a cassette tape. The story is by Sherri Patterson, illustrations by Marion Needham Krupp, with "additional material and songs by Judith Feldman".

"A Note to Parents" at the beginning of No-No the Little Seal describes No-No as "a character that young children can respond to and readily identify with. And the fact that he is a seal and not a real child places his dilemma just far enough away so that children don't feel unduly threatened or fearful."

No-No the Little Seal tells the story of a young seal who is left in the care of his admired Uncle Seal for a few days. Uncle Seal hugs No-No "too hard" and touches him in private places. No-No is scared and uncertain, but finds the courage to tell Wise Whale and his own parents. They reassure No-No that he was right to tell and what happened was not his fault.