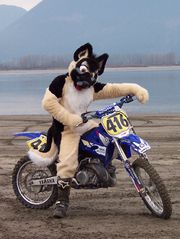 Shep has been a furry lifestyler since 2005 and has a German Shepherd as his fursona. He is a current staff member of RainFurrest, Howloween and VancouFur. He was chosen as fursuit guest of honor at Furlandia 2014.

Shep's fursuit character, Nitro, was constructed in March of 2007 by WhiteyFawks of Arend Studios, and debuted at RainFurrest 2007.[2] Nitro became well known for his stunts on a Motocross Bike.[3] . To present day, the fursuit has been seen at several conventions and events located in Australia, Canada, Europe and the United States.

In real life, Shep is a skilled tradesman working in the electrical field, as a journeyman and project foreman. His free time often includes building things from the ideas in his head and staffing local conventions. Before Shep found the furry lifestyle, he competed in the sport of motocross racing for nearly a decade. He achieved two BC Championships before retiring from competition in 2006. 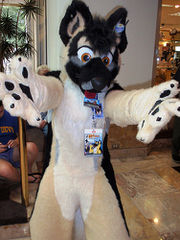 Since 2007 to present, Nitro has been a member and director of a local fursuit entertainment group. Entertaining at dozens of charitable non-profit events, including Children's Hospital, walks for ALS, cancer, juvenile diabetes, hospice, festivals and parades. Nitro has also entertained in Washington state. The fursuit has been seen on live television a few times over the years.

Beginning in 2009, Shep decided to use his creative talents and trade skills to build projects that fursuiters and local conventions could use and enjoy. These projects included: deluxe fursuit head drying trees, blowers, electrical panels, and rechargeable fursuit head cooling fan kits. The popularity of the head trees prompted Shep to build two additional units, recently adding UVC germ killing ability and timers for each head.

Shep continues to look for new project ideas to help improve fursuit lounges. His motivation is simply seeing the fursuiters enjoying the things he builds.