Nightwind "Arthur" Sapphire, aka Nightwind005 on Fur Affinity, previously wolf_exp (born 25th August 1987), is a male furry and fursuiter. He is an art collector, currently living in Sunderland, Tyne and Wear of the United Kingdom.

Nightwind is represented by a Grey Wolf. His eyes and hair vary between shades of teal and blue. His fursona has a fairly basic colour patterning, which consists of grey and white.

His distinguishing features include a 'Blue pawprint' on the left side of his chest, as well as a 'pair of wings' (reminiscent of the Taoist Taijitu) on his back. 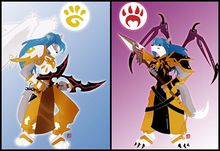 In addition to his actual fursona, Nightwind also has two 'alternative versions' which are an 'Angel' and a 'Devil'.

His 'Angel form' has a pair of large white wings replacing his back markings. His hair also becomes several shades lighter and his eyes change to an Amber hue.

In contrast is his 'Devil form', which has a pair of featherless, bone structures replacing his markings. His eyes become fully black with his iris becoming a deep red. His hair becomes several shades darker and his teeth and claws become visibly longer.

Mainly, these alternative forms are used for roleplay as well as a "story backing" for his fursona.

Nightwind's fursona mainly appears suited within light, summer-based clothing. His most prominent feature he keeps is a star studded earring which he wears in his right.

His alternative forms ('Angel and Devil') tend to wear the same clothes he does, but with noticeable alterations (e.g: Angel form tends to have torn, yet much more elegant wear compared to his Devil form which has grungier, more leaden clothes). 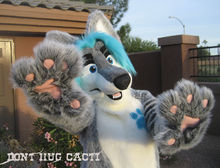 Nightwind's Fursuit, designed and made by Don't Hug Cacti.

Within 2009 Nightwind entered the field of fursuiting. He currently owns only one fursuit which he uses in a variety of outlets, including parades, Furmeets and expos.

The design, which follows closely to his actual fursona, was commissioned by a small fursuiting firm, Don't Hug Cacti.

Originally the designers of Don't Hug Cacti intended to include the small patch of blue pubic hair present on his fursona. Initially he went against this idea, in order to make the suit more socially friendly.

His first public wearing of the suit was in Manchester, November 27th 2009.

Nightwind (Second Life name, Nightwind Shu) was the original owner and creator of the BritFur Clubhouse.

The BritFur Clubhouse was made as an online spot for furries situated in the United Kingdom to meet up and socialise virtually. However, Nightwind gave away his 'establishment' due to funding problems. The current owner is now Talyn.

Nightwind is a frequent visitor of the Newcastle Furs (a small furmeet in Newcastle upon Tyne). He is often there to socialise with friends and welcome new furs.

He was the first furry within the area to commission a picture of the entire group in 2008. A trend which has now become popular amongst other groups of the furry community.

The Newcastle Furs have a reasonable number of members.

In March 2011, Nightwind appeared on the premiere episode of ITV2's OMG! with Peaches Geldof, which covered the topic of the furry fandom in one segment. Nightwind was interviewed in a mini-documentary for the segment and appeared before the live audience in his full fursuit, in which he proceeded to hug members of the audience. On hand as a guest was Dom Joly, the host of Trigger Happy TV[1][2].