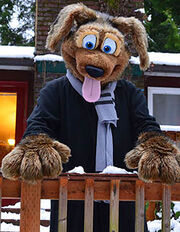 Nicodemus in a dog partial he created.

He encountered "furry" in 1993 through Usenet, specifically the alt.fan.furry group. Even before then, he always had an interest in anthropomorphic characters and cartoons but had not assigned a name to it. He has always felt a personal connection with rats and has identified as a rat since entering the fandom. 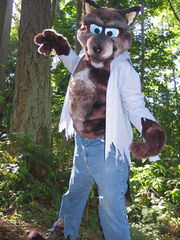 He became an active costumer in the fandom around 1994 when he created Widge the Rat. He attended California furry get-togethers and ConFurence. He continued creating fursuits for himself and others, sometimes taking commissions. His piece "An Introduction to Fursuiting" was published in the Further Confusion 2000 conbook.[1]

In 1996, he created one of the first websites with instructions on how to create fursuits.

He has been interviewed by the media several times on the subject of costuming and how it relates to the fandom.

As of 2020, he is still actively building fursuits both for himself and as commissions. He trades under the business name Nicodemus Productions.

He was the costuming guest of honor at RainFurrest 2009. He created the character Tatters the Werewolf to debut at the convention and also serve as an example for several fursuit construction panels, including "costuming on the cheap". The Tatters costume cost under $150 to make.

In 2004, he wrote Critter Costuming: Making Mascots and Fabricating Fursuits, possibly the first full-length book geared towards fursuit materials and construction. It's published by Ibexa Press and is available from Amazon. He has written several other nonfiction articles for conbooks and magazines.

Nicodemus lives in the Seattle area with his wife, Kit-Ping, and their two children.

He also participates in the Society for Creative Anachronism where his persona is Nicodemus Radomirov.