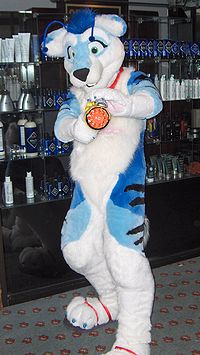 The Fandom's Favorite Fursuit Fracas, a fursuit competition organized by Exile Huscoon and Rhett Foxcoon, has finished after 88 days of voting.[1]

The contest was organized as a series of one-on-one knockout rounds, with a simple vote deciding who would proceed to the next round. Groups were formed from 16 regions, named after those fursuits entered with the most nominations. Results were calculated on the journal, and reported on WikiFur.[3][4]

Of the 176 fursuits entered,[5] only 26 received more than one nomination from their owners or admirers. Each region could have up to 16 competitors, but due to the odd number of contestants, many received a bye in the first round. By the fourth round, over half of the 32 contestants had only one nomination. Two solely self-nominated suits made it to the final 16, by which time many were receiving over a hundred votes each.

Several fursuits were nominated without their owners' knowledge, and some were annoyed when they found out that they had been included in what they saw as a "popularity contest." The organizers removed these entries once notified of the problem.[6]

The contest organizers report their intention to repeat the contest in mid-2008, filling in the time until then with "a very exciting off-season."[1] Future contests will require full contact details for nominees, who will be invited to submit pictures or videos of their suits in action.[7]