NewEinstein is a furry fan residing in and originally from Germany, who has also lived for a time in Sweden and Colorado, USA. He is active in the fandom as a photographer, fursuiter and event organizer.

Involvement in the furry fandom

NewEinstein had his first contact with the furry fandom in 2009, despite having had an interest in certain movies and anthropomorphic animals for many years. He became active starting in July 2011 by contributing his photographic artwork on Fur Affinity.[1]

In 2011 he also met furries for the first time in real life at a small furmeet in Stockhom[2], during a two year period in which he lived in Sweden.

In May 2012 he was one of the main organizers for a large two-day furmeet in Stockholm, with more than 40 attendees (including 17 fursuiters) from five different countries.[3]

Together with Trax he started the convention NordicFuzzCon in 2013; he was one of the co-chairmen, responsible for registration, and a director up to and including NordicFuzzCon 2016.[4][5] He left the board in 2016 after moving to Colorado in October 2015.[6][7]

For Eurofurence 20 (2014) and Eurofurence 21 (2015) he ran the fursuit photoshoot as vice-director, together with Atkelar.

NewEinstein runs a photographic project called monoFURS,[8] in which he shoots, processes and publishes black-and-white portraits of fursuits. All the photos in this project are made on black-and-white film, rather than converting digital color images. The typical equipment used is based on a medium format camera from Mamiya or on a Linhof large format system. All photos are scanned from the negative and published digitally. 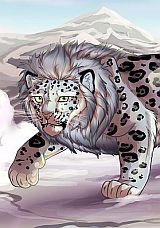 NewEinstein's fursona is a snow leopard - lion hybrid character named Sven (maned snow leopard). The character itself is only roughly developed and is more designed as an avatar-like alter-ego with similar characteristics compared to his owner.

Beside his fursona he has two secondary characters: an inverted snowleopard called N'vert and a winged lion called Leonæris.[9]

NewEinstein owns a (semi-) realistic partial suit of his fursona Sven. The suit was built by Raereira; it debuted at ConFuzzled 2012.

He also has a toony fullsuit of his character N'vert. This suit was built by Templa, and first appeared during NordicFuzzCon 2014.

In real life, NewEinstein's profession lies in the field of research and engineering. His main focus lies in materials science and semiconductor physics, and it is for this reason that he lived in Colorado from October 2015[6] to December 2017.[10]

He spends a lot of time for photography. Beside his photographic activities for the furry community he also works on more general fields of photography. He really likes travelling.