Neopets is an online game featuring virtual pets. The site was created originally by two British college students, Adam Powell and Donna Williams. Eventually, the company was purchased by Doug Dohring. In 2005 it was sold to Viacom,[1] who later sold it to JumpStart in 2014.[2]

There are a total of 54 pet species. The more popular species include Zafaras, Gelerts, Xweetoks, and Aishas. Since the main characters of the site are all primarily animals, with most of the mascots being anthropomorphic versions of the "pet" species, it can be considered a heavily furry-based universe. 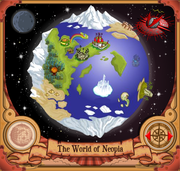 the world of Neopia

The entire game and related storyline for Neopets takes place on the fictional planet of Neopia. There are various themed "worlds" within Neopia: for example, Tyrannia is a prehistoric land, origin of dinosaur-like Neopets, and Faerieland is the home of the faeries.

The frontend of the site are basic HTML and Flash based pages. The areas you traverse in this method are practically the entire interface besides the minigames. Flash and Shockwave games serve as the main advertised method of gaining Neopoints, the currency of Neopia (shown as being different colored coins in the Neopets video games). Other ways to get money include selling and trading items, investing in virtual stocks, and participating in community events. Another form of currency accepted in Neopia is called NeoCash, and must be obtained using real life currency. NeoCash allows access to purchasing better items. Players can also dress up their pets with clothing, backgrounds, and accessories.

The Neopets staff occasionally release comic-oriented storylines in spaced apart installments that add onto the world's canon. Related minigames and game items are also included with the launch of a new series. There is also an annual "Neopian World Cup" in which participants actively take part in determining the outcome. 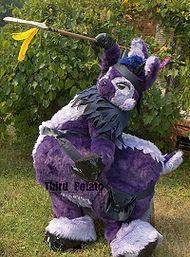 A taursuit based off of Ixi, the goat-like Neopet species.

A large portion of the community for Neopets are artists, and due to the nature of the sites theme, this also includes furry artists.

In an effort to keep the site clean, Neopets is known for banning, or "freezing", users for posting anything they consider sexual. In one case, a user started a thread titled "Any other furries out there?" Most of the replies to the topic were users who felt this was inappropriate for Neopets. All users who posted in the thread had their accounts frozen.[3]

While TNT (The Neopets Team) has become less dictatorly about furries, the furry fandom is generally frowned upon by the neopets community, though there are many furries and other who do not care, as is with every online community.

JumpStart acquired Neopets from Viacom in April 2014. Server migration began in September. JumpStart-owned Neopets was immediately characterized by glitches and site lag. On March 6, 2015, much of the Neopets Team remaining from Viacom were laid off for as-yet unknown reasons.