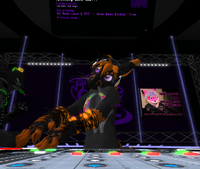 DJ Nemo at his DJ station.

DJ Nemo (d. December 31, 2017), known as Nemoen Magne on Second Life, was a trance/hardstyle DJ who lived in Maine, USA.[1] His fursona was a Qwhilla.

DJ Nemo owned Club Furnication on Second Life, where he also DJed, until October 2, 2017, when the club was indefinitely closed.

He is survived by his mate Asher Ninetails, his family and his friends.