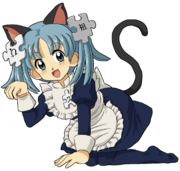 A catgirl, also known as Nekomusume (猫娘 "cat daughter") or Nekomimi, 猫耳 ("cat ears") in the original Japanese, is (normally) a female human/humanoid with such traits as cat ears, tail, whiskers and/or other feline characteristics.

Catgirls are common characters in Japanese anime, manga, and video games media. They are often misnamed as Neko girls.[1]

Less common but occasionally seen is the catboy, usually found in yaoi or Shotacon, who also falls into the nekomimi category.

Catgirls are generally not considered a "furry," character or person wise, as their animal traits are simply cute add-ons to an otherwise human character.

However, there are exceptions; for example, Natsuki Sasahara from Hyper Police is considered to be of furry interest due to her personality and instincts, which are significantly more feline than the standard nekomimi.

In addition, the "furriness" of catgirls varies from fan to fan, with some accepting catgirls as furries.