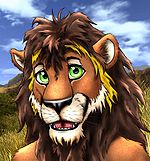 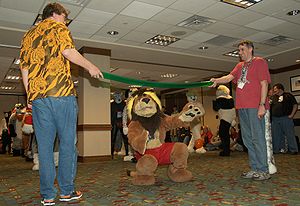 Nbowa doing the limbo while Snap E. Tiger and Ocicat hold the bar at Midwest Furfest 2007, image by Greenreaper

His V2.0 fursuit debuted in 2009, made by Don't Hug Cacti. Since then, Nbowa has attended many cons including Furry Weekend Atlanta, Furry Connection North, Megaplex, Furfright, Confuzzled, RainFurrest, and Eurofurence. He also has been in attendance at several LAFF events.

Nbowa hosts several meets and events in Iowa, with gatherings of over 50 people for his New Year's Parties and 'Stormcons', in honor of his dog, Storm.

Nbowa was mated to Tzup, an Australian furry for over 11 years.

Nbowa's interests include golf, tennis, chess, barbershop choir, piano, and classical music. He is an electrical engineer by profession, with emphasis in the field of power systems.