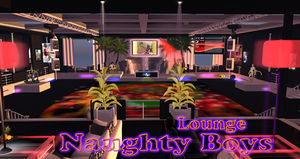 Naughty Boys Lounge, commonly known as NBL or [NBL], is a club located on Second Life that caters to gay furries, straight furries, bisexual furries and transgender furries, Humans, Nekos, and those from all walks of life. Being a mature establishment, it allows public yiffing on its premises. You can find NBL on the Sim named [1]

Naughty Boys Lounge was first built by Dominik Zanzibar, a Human avatar, in 2009. Its name Naughty Boys Lounge is self explained. It is one of the first and only clubs trying to bridge the gap between furry, human and neko avatars.

Later in the same year, NBL was taken over by Digital Bingyi as owner.

Then in 2011, Aedian Fall became co-owner with Digital Bingyi.

In Early 2012 Digital Bingyi left NBL and Second Life leaving Aedian to rebuild NBL on his own, Aedian teamed with the builder of a network called nightstalkers in Second life to help him redesign and build NBL from scratch. To this day he and this person are now owners together of the NEW NBL.

Although the name suggests the club only caters to males, the club is very open and welcoming to any gender, species or orientation.

The club features a dance floor, pool, bar and lounge area, as well as four private rooms, which can be freely used by anyone who wants a little privacy.

NBL has many staff furs in various capacities. Dancers, DJ's, Security, and Management