NamuGriff is a UK fur, born in March 1985 in the city of Southampton in Hampshire. They lived there for 4 years before moving to the Isle of Wight. After 7 years, they moved back over to the mainland and now lives in the Fareham area.

NamuGriff had a fascination with animals and a strong desire to be one from the age of 8, after seeing The Lion King. They didn't find out about the furry fandom until 2003 while studying zoology at university, aiming to find work in a zoo after graduation. Namugriff has had a number of jobs, all in the retail sector, the first being for McDonalds and One Stop, of which the latte they stayed at for 4 years before leaving for university as the position could no longer be kept open. Namugriff has also worked for Sainsbury's, going AWOL there after issues getting the wanted leave dates after a mess up, which a new leave request for was never issued. Tesco's during the summer between the 2nd and 3rd year at University and then Somerfields before starting with SWT

The current name "NamuGriff" evolved over a period of years into its current form. Having started out just as an orca named "Namu" while still new to the fandom, their fursona slowly changed over time to an otter, then a wallaroo, and finally a gryphon. The name "NamuOrca" was used for a period of time, until it was changed once more to reflect a more stable form.

The most common forms now used by NamuGriff are a gryphon and an otter, with the otter form having its own name - "Cinerus", taken from the scientific name for the Asian short clawed otter.

NamuGriff first attended a furmeet in Southampton in 2004 whilst on holiday from university. They stopped attending for 5 years while at university, and when unemployed and then working part time. In April 2009, after finishing training for their new job for SouthWest Trains, they once again started to attend the Hantsfurs meets each month, and began attending the LondonFur meets from August 2009.

From July 2009 until May 2010, they became the organiser for the Portsmouth-based HantsFurs furmeets, after the preceeding organiser, Valkyr Diamond, left Portsmouth university.

Thier first fursuit was a partial version of their otter form Cinerus. This was chosen as it was felt to be a simple design, and had the ability to be worn with their work uniform at furmeets and conventions. The half-suit design, comprising head and tail plus foot paws, could therefore also be converted into a full suit in the future if required.

In January 2010, a new husky partial named "Teryl" was acquired, going through several revisions over a period of months, until being retired around June 2010. "Teryl" was made by a local fursuit builder called TayaLu. A new version of "Teryl" is currently being contructed by another fursuit builder, with a possible option to make a body suit at a later date. (Now collected)

In April 2010, a ferret partial (name Austin after asking for ideas on FA) was bought second hand from Niiku, and this is the suit presently used (the most expensive so far), though they has plans for a fullsuit of their gryphon form in the future. It made its first appearance at the Bognor Regis furmeet in July, before being seen again a week later for the first time in London. 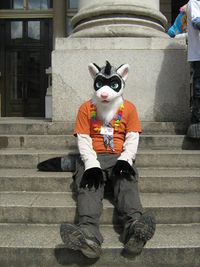 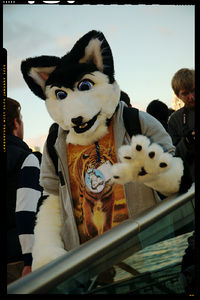 Another fursuit partial has been commisioned from Niiku of a tiger, (originally a white tiger) in the hope that it can be used in conjunction with the gryphon fursuit body.

On the 28th August, the newest fursuit partial was finally delivered at the London Fur Meet, by Schenzi who made it. A completely remade version of Teryl the husky having been built from scratch and only using photos of the previous version as references. This version of Teryl came with a new addition of previous fursuit partials, the introduction of foot paws. This partial was taken out on the fursuit walk the same day and became a great success very quickly and set the tone with a bubbly and playful manner that will be sure to carry on and develop after each meet. A body suit is now planned for Teryl, with plans for the build to start in January, involving all new paws, and footpaws with a slimmer design to the current ones. 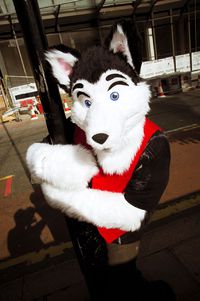 Due to having a mild form of learning disability, NamuGriff has always had a poor skill in drawing, but initially dabbled a bit with colouring a few images drawn by others. Most of their art is now is in the form of photography, developed over a number of years to its current level, from simple one-use cameras, to manual SLR cameras, before going digital in 2003. In 2009, a digital SLR camera was finally purchased and is currently used at Londonfur meets to take photographs of the suiters and others.

A number of images have been posted on their Furaffinity account.