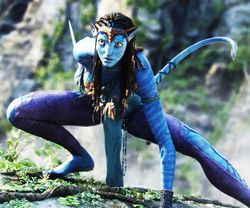 The Na'vi are the fictional alien race of blue anthropomorphic creatures resembling felines from the 2009 Film Avatar.

The Na'vi are humanoid with blue skin, with mottled stripe discolorations. They stand nine to ten feet high with carbon-reinforced bones. Their ears, located toward the top of their head, are very mobile and vaguely cat-shaped, while their eyes and nose are unmistakably so. A tendril protruding from the back of their heads allows them to share thoughts and memories with life surrounding them. The females have breasts similar to those of a human female, and the same is true for males. The Na'vi have four fingers on each hand, and are basically symmetrical.

The Na'vi wear loincloth based off those worn by Mayan indians.

They use the tendril on the back of their head to mate with a life partner, meaning they are bonded, and the bond cannot be broken during the Na'vi's lifetime.

They speak a language named after themselves, and worship Eywa, their mother goddess, whom they communicate with by linking to the Tree of Souls.