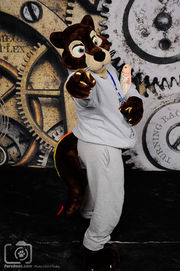 Mystery Otter is a fursuit character worn and roleplayed by an anonymous fursuiter.

Mystery Otter is a brown river otter with a rainbow stripe on his head and tail, worn as a partial fursuit with a grey hooded sweatshirt and grey sweat pants. His suit was designed by Lenny Mutt[1], and built by Arend Studios[2]. He often carries a plush rainbow trout named Feesh.

When Mystery first appeared in the furry fandom scene in early 2012, he created a game of "guess the wearer's alter ego".[citation needed] He claimed to be male caucasian,[3] living in the United States[4]. He has stated that he has only one alter-ego[5], and that "time's up" will be called after a "whole year,"[clarify] after which point he will "carry [his] secret to the grave."[6]

Mystery keeps his location and upcoming appearances secret. So far he has been spotted at 40 furry events (29 conventions, 10 local meetups and the Funday PawPet Show) in 23 U.S. states:

Appearances so far are always on weekends, 1-4 weekends apart, with at least one appearance in every month in 2012 and so far in 2013. Mystery made two appearances in a single weekend on September 28-30, 2012 (Western PA Furry Weekend and Furlaxation, approximately 3 hours drive apart), and on May 10-12, 2013 (Furlandia and Elliott's Spring Gathering, about 800 miles apart). Mystery appeared for four consecutive weekends (February 22 through March 17, 2013) in all four time zones across the continental US.[56]

At most of these events in his first year, Mystery handed out free buttons to attendees: