My Very Own Lith 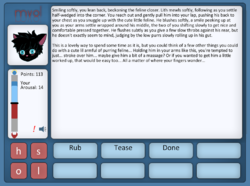 A screenshot of My Very Own Lith illustrating the game's interface.

My Very Own Lith (also known as MVOL) is a text-based Flash game created by Lithier. An Android port is also available using the Adobe AIR framework.[1] The game comes in three versions: the Public Version, being the only version available to everybody; the Supporter Version, with cheats enabled and the Deluxe Version, with a higher resolution interface.[2]

The game is centred around a cat named Lith, whose sex and gender can be decided by the player at the start of the game.[2] The player's interactions with Lith will decide how Lith will act towards the player and the progression of the story.