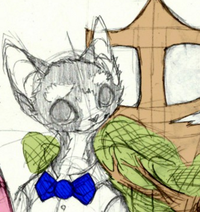 Mw is the sole founder of Bolyh,[1] a Hungarian furry community on Facebook. He is also part of the team for Wildcard[2], an upcoming Hungarian furry convention, where he is the officer of electrical operations and formats (EOF).

His fursona is a space cat, that is basically a cat with a raptor-like tail, from another planet. According to its fanfiction world, space cats are refugees of an upcoming apocalypse to their planets, building up a self-generating artificial intelligence around themselves in order to save their memories/culture, and to try living a whole life inside of a computer while floating in somewhere out there in the vast nothingness of space.

Since 2012, Mw is mainly known for drawing traditional sketches, using strictly an HB (#2) mechanical pencil. He is also familiar with Photoshop, Flash and ZBrush. However before joining the furry fandom, he used to be a house/progressive DJ, and also played keyboards.