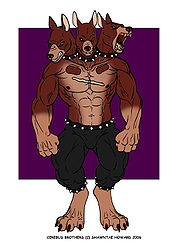 The Cerberus Brothers from Extinctioners

Multifurry is a term for furry characters with more parts than usual: extra heads, legs, arms, tails, as well as other body parts. Sometimes, more than one part is replicated.

The 'typical' multifurry has multiple tails, although this is far from universal. Some multifurs have two heads, and others multiple pairs of arms.

Some species are automatically excluded, because of their regular features.

Did you know? The logo of the Italian petrol company Agip is a six-legged dog breathing fire.