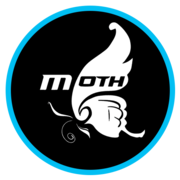 MothNet, also M.O.T.H. and M.O.T.H. Networks is a furry community that hosts various video game servers and supports a growing community of furry gamers. MothNet was started in July, 2016 by MothGirlMusic, also Miss Moth and MOTHNetOnline. Miss Moth is the current owner and administrator of MothNet and hosts all of its systems and servers on her own personal hardware. Mothnet's Website went online in late 2018 and serves as a directory from which users can find and join the various servers and games are hosted. The MothNet slogan is For Furries. By Furries.

MothNet hosts a growing number of furry themed game servers. Most of the servers have active playerbases and utilize a small number of popular plugins to enhance the player experience.

The MothNet Minecraft server, MothCraft, began in 2016 as a small server hosted by Miss Moth for her friends. As more people began to express interest in joining, she expanded it into a dedicated server and began to add and write custom plugins for the server. As of 2019, the MothCraft furry community Minecraft server hosts an estimated 15 unique players each day. The furry community server has a number of custom plugins that it runs serverside, meaning a modded client is not required to join and play. The core features of the MothCraft Minecraft server include its three unified servers: Survival, Creative, and Minigames. These three servers can be swapped between with a simple in-game chat command, and allow players to play games, see the creations of other players, create things without the restraints of Survival Mode, and play vanilla Survival Mode.

Another core feature of the MothCraft server is its live-update map, which can be accessed at any time here. The map shows the location of online players, the borders of towns and nations, and the outer border of the world map.

Other features in the MothCraft server are a player economy that uses MothBux as a currency, cosmetic unlockable items, Luckyblocks, towns and nations, PvP, Minigames, and custom items and sprites.