During the summer vacation in a city, the protagonist-player Hiroyuki Nishimura gets a letter from a friend in the village in which he spent his childhood but from which he moved away 5 years ago. His grandparents currently live there, so he decides to return.

At the bus stop in the village, he sees an anthropomorphic tiger named Torahiko, who was one of his childhood friends. Torahiko tells Hiroyuki that later there will be a welcome-back party for him at a restaurant. There the player is greeted by all his anthropomorphic childhood friends, in addition to a newcomer lion named Soutarou who moved to the village three years ago. The player must then choose who Hiroyuki will sit with.

The rest of the plot depends entirely on who Hiroyuki sat with, who becomes his love interest based on the players actions throughout the game. Some parts of the storyline are shared between plots, such as the Beach and Camping trips, but otherwise each plot offers a vastly different story. In addition, each story typically has a good and bad ending, however in some plots joke endings are available as well. 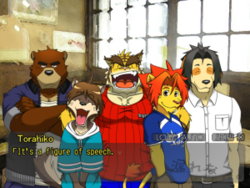 A screenshot from the English translation of Morenatsu (From Left to Right: Juuichi, Shun, Torahiko, Soutarou, Kyouji).

In January 2003 in Kemono-thread for gay (Title: "獣人、獣キャラが好きなゲイ集まれ!") in the board for mature-homosexual (大人の同性愛板[2]) of 2ch, the greatest Japanese anonymous BBS, a user 640 who was an amateur musician posted the plan of visual novel, demanding that kind of games.[3] It was warmly accepted by the other users and in the first half of the same year, 640 launched the whole project of Morenatsu.[4] By 15 June, all design of characters was recruited on the paint BBS at the website.[5] The first member was 640, the director, new, the writer, Kukiwakame (茎わかめ), the programmer, and gamma-g (γ), the designer and illustrator.[6] Their first aim was the release in Summer 2004,[7] however, it seems that the project hit a snag by the end of 2004 maybe due to the lack of management of 640. [8]

In Dec 2005, gamma-g, the main and the most influencial among the former team became the director. And in Aug 2006 the new staff weblog was re-opened[11] However, as a result, he was unable to develop the plan.

In May 2007 the project was resumed under Penpen (ペンペン), one of the members of the former team, having been writing the scenario of Torahiko, and at the same time, gamma-g quited from the project.[12]When they released the prototype version in November 2007[13], they announced they were going to release the complete version in the end of Mar 2008, however it was postponed at 26th Mar 2008.[14] Then it was determined to be released at the end of 2008, however it was postponed again due to the lack of the quality, for detail, the delay of writing of the script and drawing of some graphics.[15]

Indeed, it was the first half of the 2010s that this game was devoloped and released no matter how early the project was started. It was Aug 2010 after over two years that they released the route of Tatsuki and Konosuke.[16] In Sep 2011, the route of Shun and Kouya was released[17] It was Dec 2012 that the route of Juichi and Shin was released, [18] but this was actually the final release.

Since 2013, the project was actually stopped again. And finally on July 20th in 2015, the development on the game suddenly ceased[19] and the routes of Torahiko, Kyoji and Sotaro was remained undeveloped.

In November 2017, a Tumblr user by the name of DzahnDragon decided to recreate Morenatsu, while making many alterations to the story in an attempt to resolve any plot contrivances of the original game. This iteration, titled Morenatsu ~Revisited~ sought to bring a completion to the undeveloped routes, and flesh out the existing story. Morenatsu ~Revisited~ released its first demo to mostly positive reviews. As development continued, another three members were added, and thus, Stormsinger Studios was created. As time passed, it became clear that new assets would be required, and as such, an artist was brought onboard. However, as more and more was added to the game, it became obvious that the different assets clashed too much from the original, and it was decided to start the project anew, using only original assets. This iteration would be titled Homecoming ~Morenatsu Revisited~, and it would be the birth of a completely new Morenatsu.

Homecoming has often been the topic of controversy within the furry VN scene, as many artistic licenses were taken. For example, Hiroyuki has had his species altered, and is now an arctic fox. All references of humans have also been removed, and characters have had their ages adjusted, the latter most likely due to legal reasons. Homecoming has also expanded upon the events that unfold within the story. Whereas in the original Morenatsu, Hiroyuki would have only one interaction per day, in Homecoming, there are multiple interactions per day. This leads to increased play time, and as paths intersect, a much more varied experience.

Homecoming ~Morenatsu Revisited~ changed hands twice. In 2019, while DzahnDragon has shifted his primary focus to his own original project, he handed control of Homecoming to Frostclaw, who became the primary developer in his place. In mid-2021, Frostclaw stepped down as project director, returning control back to DzahnDragon. However, he still maintains an active role in the project, as both a writer and the director of the iOS version. With this shift in leadership came the announcements that all sprites would be receiving a renewal which would see them more closely resemble those found in the original Morenatsu, while also having their own unique elements to them.

The current build can be found on the group's project page[20] or on their official website[21].

There was no official patch for translating to the foreign languages because the staff thought that they were not able to take care of it.[22]

All those without linguistic explanation was written in Japanese.