Morbius' fursona, Giovanni Magnus, as portrayed as a Sackboy. He tends to use this as his avatar.
The MorbiusMonster, sometimes spelt as "Morbius Monster" (born August 21st 1992) is a male furry artist and amateur writer, residing in Bristol, United Kingdom. His fursona is a werewolf called Giovanni Magnus.

Morbius set up a deviantART page in 2009, and confirmed himself to be an avid furry in early 2011.

The MorbiusMonster is enthusiastic about writing and art, though admits to no professional or formal training behind either. His most notable work, one in which he talks of fondly, is that of "Arzonus - City of Werewolves".

Despite being skilled within art and literature, Morbius's real passion is science, and he enjoys problem solving and debating. From what is visible on his Steam, he enjoys games such as Portal 2 and Team Fortress 2, and also has stated in interests in other strategy games.

At first glance, Morbius appears informed and enthusiastic, though admits to having something of a much darker side to him. Morbius is also something of a loner and hasn't named any past relationships or even anything about himself in real life, simply dismissing the notion of mentioning his interests as "for the best"

Morbius has positively identified himself with having Asperger's Syndrome, and so claims this is main reason for some of his erratic behaviour. 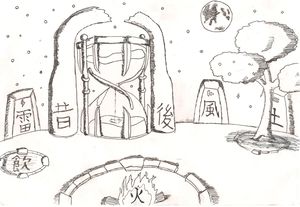 Singularity, as drawn by Morbius

The MorbiusMonster has an interest in art, as is visible on his Fur Affinity and deviantART pages. His style tends to be hand drawn, with a great deal of his sketched work being in monochrome. Due to his lack of formal training within art (he has stated he didn't want to take art because the pressure to sketch ruined the fun of it), his ability isn't as well recognised as other contemporary artists.

The majority of his art follows that of his writing, and a great deal of his submissions on Deviant Art tend to be of Sackboys made either as commissions or of his own volition. 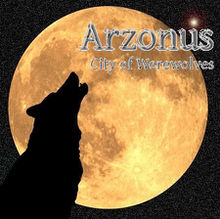 The MorbiusMonster's main claim to fame is that of his quest saga for the MMORPG game RuneScape. The saga, named "Arzonus - City of Werewolves", is set within the titicular city of Arzonus, home to a breed of werewolves that differ greatly from their counterparts in the East. Unlike their cousins in the East, the Arzonus werewolves took a different path in the God Wars, choosing not to massively follow the present Gods and instead have based their faith around other, lesser known deities and have developed around science, notably the science behind the practise of Summoning (a skill within the respective game).

The thread, during its initial run, recieved great acclaim from players and even admin from the game designers, being awarded "Thread of the Week" on the RuneScape forums during 2009. Morbius currently claims to be working on the final quests for the series and on a novel based on the saga, however little information has been revealed. 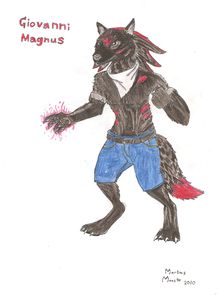 Giovanni Magnus as represented at 17.

The Morbius Monster's fursona is most well recognised as Giovanni Magnus, a werewolf from Arzonus and pivotal character in the upcoming novel. Giovanni roughly ages out at 20 (born December 24th, unknown year) and is definitive by his black fur and red markings across his body. He is roughly between 5' 8" and 6' and has a sturdy build.

Originally, Morbius planned to make Giovanni a villain, but decided earlier on that Giovanni should instead be a "misunderstood hero", much like the character's great grandfather, Theta Magnus. Whilst initially planning to release him as a character to be featured in one of the quests of Arzonus, Morbius couldn't find a suitable way to introduce him, so planned that he would appear in the novel, which would tie into the events of the quests. Despite Giovanni being declared deceased within the quests, a great deal of the story line revolves around him.

Giovanni's character has been likened a great deal to that of Morbius, who admits that he unintentionally put "too much" of himself into the making of the character. Giovanni is intelligent, innovative and polite, but is lonely, reclusive and is somewhat bipolar in his emotions. This has led to the character to be somewhat isolated and therefore very self conscious of himself and strongly judging of others. For whatever reason, Giovanni has a dislike of humans, though it hasn't been explained as to why he dislikes humans.

One of the most notable features of Giovanni is his ability, the power to absorb fear and convert it into power of almost any kind. This has made Giovanni both revered and feared across his culture as his appearance and ability are reminiscent of a demon in Arzonus called "The Nightmare". Giovanni has had measures put in place to control this ability and appears to be working towards being independent of it. Whilst always triggered through feeling the fear of others, Giovanni also has sometimes been able to produce a shadowy "third-arm" when he is enraged, although this has been declared as rare.

The character serves an ongoing rivalry with Morbius Maelstrom (a character originally planned to serve as Morbius' fursona), another werewolf like him who is a few years younger, and has the ability to copy the abilities of others. Their ongoing feud appears to be based around Maelstrom wanting to have [Giovanni's] ability and Giovanni refusing to allow him.

In regards to mates, Giovanni's most recent emotional interest was of another werewolf called Cheyenne, but their relationship has never been anything moreso that just working together, though it appears Cheyenne might harbour some attraction to him. Giovanni hasn't been identified as either a smoker or a drinker.