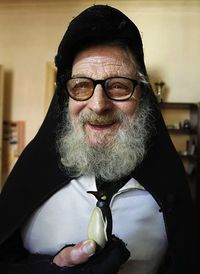 Alfred "Monsieur Pingouin" David (Mr. Penguin, English) is a person who lives in Brussels, Belgium who walks around town in a penguin suit.[1]

In 1968 an injury to David resulted in a limp that his colleagues referred to as a waddle and they dubbed him Mr. Penguin.[1]

He collected about 3,500 items of penguin-related items. His wife kicked him (and his collection) out after he told her he wanted to change his name to Mr Penguin.[1]

He dreams of his burial arrangements being of him in his penguin suit, inside a coffin decorated with images of penguins buried a deep ocean close to a penguin habitat in Antarctica.[1]