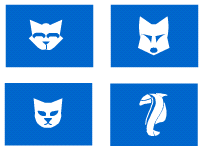 MonFur (Montreal Furry) was a furry community for furs in and around the city of Montreal, Quebec.

Established in July of 1999, the group was organized primarily through their own mailing list, before moving to Facebook and Telegram around 2015. The community was highly bilingual, welcoming both English and French members. The website, which was edited by members, contained information on recent and upcoming events from social gatherings to conventions. Events were often hosted. The Christmas party was especially popular, reaching 70 attendees in 2019.

In November 2020, the administrators decided to shut down the group. The reason being that the founding fathers diddn't recognize the group anymore, and asked politely for the group to be left to rest.