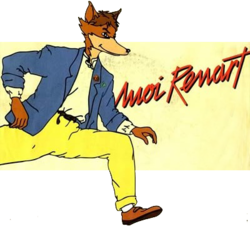 Moi Renart is a 26-episode French animated television series that was first broadcast on September 20, 1986 on Canal+. It was later rebroadcast on M6 and France 3 in the 1990s.

The episodes are each 24 minutes long, and the series was created by French animator Bruno-René Huchez.

The series revolves around the adventures of Renart (voiced by Jean-Pierre Denys), a young and mischievous fox who has just moved to Paris from the countryside, accompanied by his pet monkey Marmouset.

He moves to the city to get a job and visit his grumpy and stingy uncle, Isengrim, who is a deluxe car salesman, and his reasonable yet dreamy she-wolf aunt, Hirsent. Reynard meets Hermeline, a young and charming motorbike-riding vixen journalist.

He immediately falls in love with her and tries to win her heart during several of the episodes. As Reynard establishes himself into Paris, he creates a small company at his name where he offers to do any job for anyone, from impersonating female maids to opera singers.

To help with this, he is a master of disguise and is a bit of a kleptomaniac, which gets him trouble from police chief Chantecler (a rooster) who often sends to him police cat inspector Tybalt in order to thwart his plans.

A few key characters of the series derive from French folk tales, including Renart (who is derived from the trickster figure Reynard), Chantecler the rooster and Tybalt the cat.