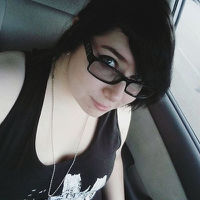 Miranda Gusek, also known as SushiNomster, or Sushi for short, and formerly as SorrowfulWoe (born August 20),[1] is a furry artist and writer who lives in Illinois, USA. Miranda is known for her kemono and anime art style.

In 2006, Miranda joined IMVU, where she created her first fursona, Saang. At this time she didn't know much about the furry community and just hung with friends on IMVU that played as human and demonic characters in literate[clarify] role-play groups.

In 2011, she attended her first furry convention, Midwest Furfest, where she learned more about the fandom, and joined Fur Affinity on November 20, 2011 under the name SorrowfulWoe. It was at this time that her second fursona, Woe, was born.

In 2014, after an extended off-and-on hiatus, Miranda returned to the fandom under the handle SushiNomster. She had fallen out of her new online handle as it "no longer represented who she was". 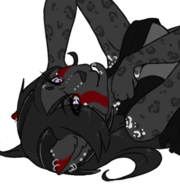 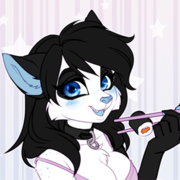 Saang is a jaguar-gargoyle hybrid. She is depicted with violet eyes and black fur with jaguar spotting and white moon spots. During the day, Saang wears sunglasses to protect her eyes from the sun and bright lights. If her eyes are exposed to harsh lighting they bleed and cause further staining streaks below her eyes. Saang has since been retired but ownership still remains to Miranda.

Woe is a Solvor, a personal species created by Miranda. Woe was depicted as a ill-tempered and anti-social fur who only liked sweets and music with a scar of the Roman numeral for thirteen on her muzzle. Woe was originally created to be a gore and vent character. Woe is currently for sale.

Void - In 2013, Miranda felt disconnected with Woe, so she created a new fursona named Void, a Yokai hybrid between a bakeneko and a nekomata. She is depicted as a young fur in her late teens or early 20's that is in love with Japanese culture. she loves video games, good foods, books, cosplay, photography and cute things. Void has since been sold to a new owner on Fur Affinity in 2016.

Kuu-chan (Rōmaji: Kū, Kuu; Kanji: 空; Hiragana: くう.) - Kuu-chan was Void's rebirth of her design that later became a different fursona all together. Kuu-chan, like Void is a Yokai but strictly a nekomata. Kuu-chan's story is she is unable to contain her violent side and cuts her twin tails short at the base, resulting into a bobtail. Kuu-chan is currently for sale.

Sushi - In late 2014 Miranda fell disconnect to Void and Kuu-chan. In early 2015, she began creating a new fursona that still stuck with a Japanese theme. She created concepts for a calico cat and was inspired by the Maneki Neko. The original design for Sushi was a traditional colored Japanese Bobtail adopt she created to sell and later kept, changing the oranges to pastel blue and adding her Lucky Cat markings, her stars. Sushi's canon lore is she is a Lucky Cat of Wishes, specifically wishes of falling or shooting stars.

Miranda is active on Second Life where she creates simple modifications to items in-world. She often hosts funding for free contests and also assists new furs in creating their own in world avatars.