The legend of the Minotaur[edit] 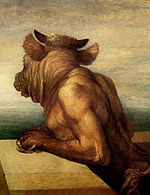 Before Minos of Knossos became king of Crete he asked the Greek god Poseidon for a sign to assure him that he, and not his brother, was to receive the throne. Poseidon agreed to send a white bull on condition Minos would sacrifice the bull back to the god. Indeed, a bull of unmatched beauty came out of the sea. King Minos, after seeing it, found it so beautiful that he instead sacrificed another bull, hoping that Poseidon would not notice.

Poseidon was very angry when he realized what had been done, so he caused Minos's wife, Pasiphae, to be overcome with a fit of madness in which she fell in love with the bull. Pasiphae went to Daedalus for assistance, and Daedalus devised a way for her to satisfy her passions. He constructed a hollow wooden cow covered with cowhide for Pasiphae to hide in and allow the bull to mount her. The result of this union was the Minotaur. In some accounts, the white bull went on to become the Cretan Bull captured by Hercules for one of his labours.

The Minotaur had the body of a man and the head and tail of a bull. It was a fierce creature, and Minos, after getting advice from the Oracle at Delphi, had Daedalus construct a gigantic labyrinth to hold the Minotaur. It was located under Minos' palace in Knossos. 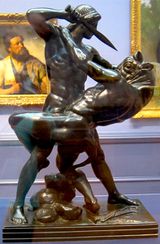 Minos had just won a great victory over the Athenians, so demanded that seven Athenian youths and seven maidens be sent every ninth year to be devoured by the Minotaur. When the third sacrifice came round, the Greek hero Theseus volunteered to go to slay the monster. Ariadne, Minos' daughter, fell in love with Theseus and helped him get out of the maze by giving him a ball of thread, allowing him to retrace his path. Theseus killed the Minotaur (with a magical sword Ariadne had given him) and led the other Athenians back out the labyrinth.

Minos, angry that Theseus was able to escape, imprisoned Daedalus and his son Icarus in the labyrinth. They were able to escape by building wings for themselves, but Icarus famously died during the escape.

Sometimes the Minotaur is represented as a bull with a human torso instead of a head, like a bull version of the Centaur.

The story of the Minotaur may have come from the Minoan worship of the bull. Shrines throughout Crete have been uncovered dedicated to the bull, which was to represent strength. Crete was a military nation, the very first maritime military empire in the world.

The concept of the sacrificing of youths to bulls may have come from the ancient sport of bulljumping. The sport was extremely popular in Minoan culture and much art exists of it that archaeologists at first believed to be some sort of ritualistic sacrifice. In bulljumping, the naked youth (male or female) would run at a charging bull and in a display of athletic prowess and courage, grab the bull by the horns and vault over the bull. The mortality rate of this sport was very high, again lending to the legend.

Massive ruins that are believed to be the ruins of Minos' palace have been found at Knossos, but the labyrinth has not. The enormous number of rooms, staircases and corridors in the palace led romantic Victorian archaeologists to believe that the palace itself was the source of the myth, but the absence of creature comforts like bathroom facilities tend to disprove this theory in modern day. It is now often believed to be some sort of temple, similar to King Solomon's temple.

Some modern mythologists regard the Minotaur as a solar personification and a Greek adaptation of the Baal-Moloch of the Phoenicians. The slaying of the Minotaur by Theseus in that case indicates the abolition of such sacrifice by the advance of Greek civilization.

A political interpretation has that the Greeks freed themselves from the tributes and the power of Crete.

Minotaurs in furry and popular culture[edit]

The concept though of a half-man, half-bull, is one of the earliest examples of anthropomorphic characters, but minotaurs as a whole are quite uncommon in the furry fandom.

On furry visual novels, minotaur and bovine characters have appeared in a few instances:

Minotaurs feature in some fantasy role-playing games as a race of monsters rather than a unique creature: