Mina Kitsune's internet avatar Cute Kitsune
Mina Kitsune (avatar name Cute Kitsune) is known in the furry community by her real name. She was born in 1982 in Nevada. She spent much of her childhood moving from Florida to California and everywhere between. As a young adult she joined the army. After she got out she went on moving again until she ended up in Iowa in 2008, where she got engaged to Kevin Keeney and started up the company Furry Moon Creations. Around 2001 she attended two furry conventions a year: often Morphicon and Midwest FurFest. She is known on the internet as Cute Kitsune. She is an avid gamer who grew up playing Dungeons & Dragons, Werewolf: the Apocalypse, Magic the Gathering, GURPS, Star Tropics, Breathe of Fire Series, Phantasy Star Series, EverQuest, Final Fantasy Tactics, World of Warcraft, Pokémon, and a large number of obscure titles. She has been crafting her own world and game since she was seven years old. It has always been a furry game long before she knew what a furry was. 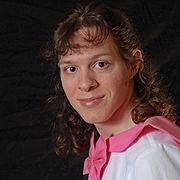 Mina Kitsune in her Sailor outfit.

Second Life where she is know as Mina Sprawl there she is often seen as an Eight tailed golden anthropomorphic kitsune. On Second Life she helps manage Kevin's Estate "Lop Ear Purlieu" which consists of five regions. Falcon Forest is known for its lush green trees and forest theme with a large volcano dominating the center. North Forest Islands lays north of the Volcano and consists of a hand full of large islands. To the south of the volcano lies Kyubi Cove with its many waterways between large fields and hills. Going deeper south along the waters takes you to Sedary Sea as its name implies it has the largest water content of the estate with a few beautiful landscaped tree covered cays. West of the sea is Isle Des Lapins with its carefully cultured grass and blooming flora and fauna. Over looking this Japanese themed area is a luxurious mansion. Parcels for rent open up from time to time, but are very low cost despite the high quality of the estate. Some have lived within the estate since November 2007. The Estate itself was formed August 1st, 2007.

Furry Moon Creations is a software company that plans to bring quality games and business products with a furry mindset. Moonshards is a furry game that has been being planed since 1989. It wasn't until 2008 that the first pieces of code was written. The Furry Life Grid is another Furry Moon Creations project. The goal is to provide a furry alternative to Second Life. It is not an unknown fact that furs make up a large base of Second Life but it would be argued by many that Linden Lab would prefer to hide that fact and gloss over it. The most heavy proof to this is the removal of a fur avatar among the starters. Back in 2006 you could start as a furry in 2009 only humans are valid options for new accounts. There are other projects being planed but are business related.

In November of 2010 The Moonshards first public demo was held at Midwest FurFest. So many people attended that many had to be turned away do to lack of space. While the game still had some minor flaws the overall result was a public approval. The second live demo is scheduled for May 2011 at Morphicon. The company announced the release of a quick start guide for the Moonshards.

Spring of each year started in 2008 Mina would ask the locals why there was no furry convention in the state. On March 24th 2011 Striker replied "Lets start one!. Thus Foxicon was born. Mina was elected as acting chair while the convention got started.