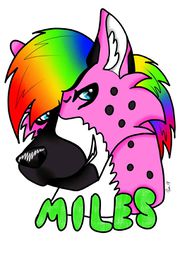 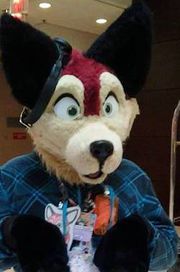 Miles Hyena Sauber, also known as Cookie-4G, (born in Nürburg, Rhineland-Palatinate, Germany) is a furry artist and fursuiter who lives in Michigan, USA, with a second place of residence in NewYork.

Miles' fursona, created in early 2006, is a pink hyena with a rainbow mohawk, lots of black spots, and a tribal marking on his arm. His initial fursona was a white wolf, but was soon discarded as not being original enough.

Miles' fursuit, Cookie-4G, is a fox-Welsh corgi hybrid constructed in 2009 under the name Cookie, Later Adopted by Miles Hyena Sauber in 2013, The name was Changed to Cookie-4G to modernize the character.

Cookie 4G was upgraded in 2015 to Cookie 4G LTE with a new suit made by Green Fox Fursuits in California.[2]