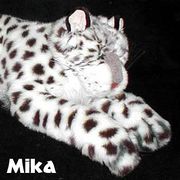 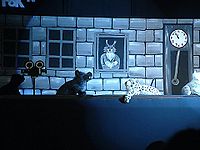 Mika at the Eurofurence 12 Pawpet Show

Mika SaéSucasa is the tough snow leopard pawpet girl from Eurofurence's pawpet show, DoPE (Department of Pawpetry Entertainment). She is very hot blooded and very known for her rage attacks - and you better take her favorite sentence serious: "Nobody messes with Mika" else you meet with her frying pan. Her boyfriend is Lionel, the lion.

Mika first appeared at the Eurofurence 9 pawpet show in 2003. She is voiced and played by TaniDaReal.

Like her three main companions Poke the ferret, Lori the vixen and Lionel the lion, she is a Folkmanis puppet.

Spoiler warning
As told in Dope pawpet show 10: Operation Desert Snow a new side of Mika is shown. As she was contracted as a bodyguard she fell in love with a client named Rashid. Later as this forgotten friends asks her for help. She is quick to take flight and rush to his aid, having a very jealous and concerned Lionel trying to catch up with her.