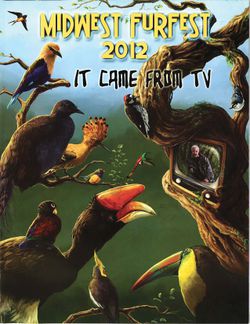 Midwest FurFest 2012 was a convention held at the Hyatt Regency O'Hare in Rosemont, Illinois from November 16th to November 18th, 2012. Total attendance was 3,216, including 743 participants in the fursuit parade.

The convention charity was Felines & Canines, for whom the convention raised a grand total of more than $40,500.