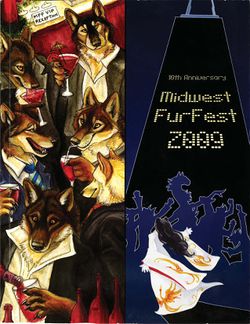 Midwest FurFest 2009 was a convention held at the Westin Chicago North Shore in Wheeling, Illinois from November 20th to November 22nd, 2009.[1] Total attendance was 2,040, which included 145 sponsors, 55 anniversary sponsors and 357 participants in the fursuit parade[2]

In celebration of the convention's tenth anniversary, all of the Guests of Honor from the first nine years were invited back. Of the the 29 Guests of Honor, the following attended in-person:

The convention's charity was Kane Area Rehabilitation and Education for Wildlife. Their table displayed numerous rescued animals (including a lynx, a tortoise, a hawk and a one-eyed owl).

An experimental theatrical event - Too Much Light Makes The Baby Go Blind - gained a positive reception.

At closing, it was announced that the convention would move to the Hyatt Regency O'Hare in Rosemont, Illinois in 2010.[3]

A Comics Curmudgeon blog entry in March 2009 showed Slylock Fox and declares the title character is "changing into his giant rat costume; our favorite detective is actually suiting up for Midwest Furfest ’09".[4]